Back to all articles

Winning or Losing in the Recession

In June 2020, Australia announced it had officially entered into a recession for the first time in 29 years. With many marketers having not weathered a downturn of such proportion before in their career, the Communications Council along with marketing consultants Rob Brittain and Peter Field looked at how these professionals can best navigate this path of uncertainty through to recovery with a specific focus on Australia and New Zealand.

It has been said that “how the war is fought determines who wins the peace.” There has been much written about the importance of continuing to advertise during recessions, but the simple fact is that whilst it will have a positive impact during the recession, the real benefits will be seen during the recovery.

At this point having a longer-term perspective is challenging but what CMO’s do now will have a huge influence on the long-term trajectory of their business. Marketers must not give up the fight to retain as much of their advertising budget as possible. The economic recovery will create a tide that lifts all boats, but it is those that were able to continue to invest for the future, using the recession to their advantage, that will emerge as winners.

The April month advertising spend numbers made for sobering reading, the cuts were universally savage and significantly deeper than those seen during the GFC recession.

Cutting advertising during recession is normal and, at a total market level, it takes years to regain the previous level of investment. After the GFC recession, Australia and the US took seven years; the UK took five years and New Zealand still has not regained its pre-GFC level.

However, the cuts have bigger implications in some countries than others. There is a spectrum of commitment to advertising investment during periods of economic expansion meaning that in some countries the lost investment in brands is never recovered, leaving them in a permanently weakened state. As can be seen in the charts below, this is the case in both Australia and New Zealand, not so in the UK and US. 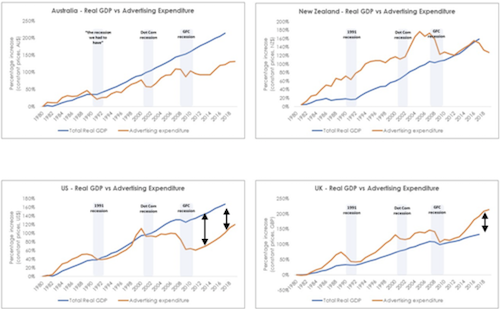 In countries where commitment to advertising is lower, such as Australia and New Zealand, it has implications for the economy as a whole. Economic productivity declines during a recession and the reversal of this is a key driver in returning to growth. The role advertising plays is creating consumer demand for brands; as demand grows it stimulates firms to improve their individual competitiveness through innovation and investment, the result is in an increase in productivity. Advertising needs to play its role in leading the return to growth.

We should be open to the possibility of a fast recovery

We are in uncharted territory and the pervading view is one of pessimism, with many anticipating a protracted downturn with a long path to recovery. This view is important context as our mindset is a big driver of how we look at the future and our ability to recognize and take advantage of opportunity.

Recessions caused by epidemics and pandemics have occurred in the recent past – the Spanish flu in 1918, the Asian and Hong Kong Flu’s in the 50’s and 60’s and SARS in 2002. In every case the recoveries were fast (“V”-shaped.) This is because the recessions weren’t due to structural issues in the economy, monetary policy decisions or issues with financial liquidity; they were caused by a massive supply and demand shock due to an unforeseen external factor – a virus. 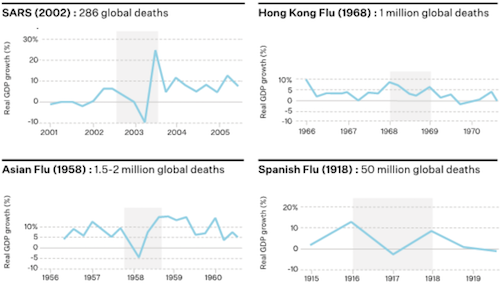 Notes: All charts are for US GDP, except for SARS (2002), which is for Hong Kong. Real GDP growth is quarterly except for 1918, when it’s yearly.
Source: “What Coronavirus could mean for the global economy”, Harvard Business Review, 3rd March, 2020.

This is the situation we find ourselves in today. Government enforced lock downs in response to COVID-19 have effectively closed economies, causing a recession. In many countries, policy support is focused on protecting jobs and maintaining financial liquidity, in doing so preserving the capital that businesses need to restart and the confidence that consumers need to spend. Effective ongoing containment of COVID-19 is a key factor but, in many sectors, the key constraints are social distancing and internal border controls. As these are relaxed the brake on the economy will increasingly loosen.

Advertising is a highly effective use of capital during a recession

History tells us that winners in recession are in the minority. A Harvard business review study covering three global recessions, shows that 80% of US firms had not recovered their pre-recession levels of sales and profit growth 3 years after the recessions had ended.

But there were winners, an elite group which struck a balance between defense and offence, ensuring that they survived the recession whilst laying the groundwork to spur future business growth. This was achieved through reducing fixed costs whilst continuing to prioritize customer preference via investment in R&D, NPD & advertising. This is where advertising fits, it fights the battle for the customers memory, supporting the business focus on increasing customer preference. When category demand returned, the winners got an unfair share of it. And not just in the recovery, but for many years after.

The thing to remember is it’s all relative. Winners may maintain the quality of their product whilst competitors let theirs decline; they also maintain their price position relative to their competitors. This also applies to advertising. In the current environment many competitors are spending less, so there is opportunity to increase the “share of voice” of your advertising, most likely from a lower level of absolute spend. The important thing is the level of investment relative to competitors.

Share of voice (SOV) is one of the most important concepts in effective advertising planning – it is a measure of a brands advertising intensity relative to category competitors. It is empirically proven that brands require a share of voice in excess of their market share (ESOV) in order to increase their share of market.

Analysis by Malik PIMS covering over 1,000 firms in advanced economies across multiple recessions assessed the impact of increasing share of voice on return on capital employed (ROCE.) Their analysis shows that advertising is a highly effective use of capital during a recession. 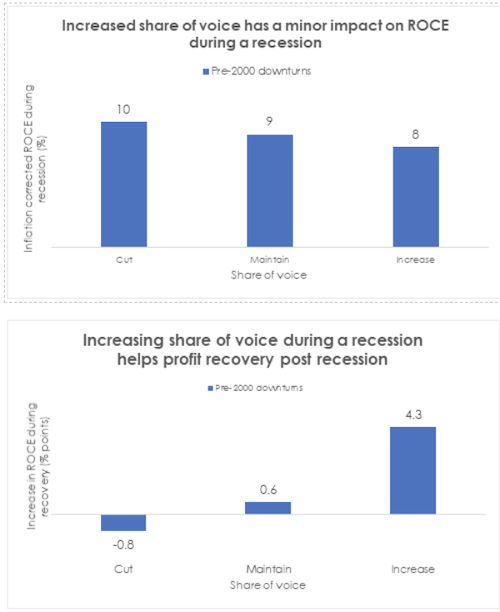 ROCE = Return on capital employed
Source: Research by Malik PIMS, sourced from “Advertising in a downturn”, a report of key findings from an IPA seminar.

Increasing SOV causes a minor drag on profitability during the recession, this is unavoidable when category demand has declined. However, it has a huge positive impact on profit recovery after the recession. This is where the long-term perspective is critical. Advertising in a recession is an investment, the main effect of which is to create future demand for the brand, enabling the business to take full advantage of the economic recovery.

Advertising still works just as well as it did before COVID-19, but brand building has increased in importance

Whilst the COVID-19 lock downs and the ensuing recession are the cause of the savage cuts in advertising, uncertainty from marketers as to the effectiveness of their current (or planned) advertising campaigns has played its part. This was an issue looked at very quickly by Orlando Wood at System 1 (available on the LMS blog here).

There were two important implications from the System 1 study. Firstly, advertising is still working as well as it did before COVID-19, so in many cases marketers can continue with the campaigns they had previously planned. Secondly, brand building is working better, so marketers should reassess the balance of their investment between long term brand building and short-term sales activation. There are some obvious exceptions but in many cases a decision to go dark due to uncertainty about the effectiveness of previously planned advertising campaigns is unfounded.

Increased focus on brand building is growing strongly in B2B. There is an increasing pivot away from 1-to-1 sales activity and into marketing programs that are both “one-to-few” and “one-to-many”. B2B leaders are not thinking about when they return to the old strategy, but how they can create this new hybrid approach. In “Brand and Demand” (LinkedIn 2020), Binet & Field showed that the same five principles that drive best practice in B2C marketing also apply to B2B: these include the principles that drive best practice in recession.

There’s plenty of evidence regarding the advantage of advertising during a recession, but the downside of under investment is less well known. In a new analysis using the IPA database, Peter Field looked at the impact of excess share of voice (ESOV) on campaigns that were in market during the GFC recession vs those in market 2 years before or 2 years after. In support of many previous studies, Peter found that those campaigns that that had strong, positive ESOV during recession performed better than in non-recession periods. But, critically, it was also observed that the penalty for underinvestment in advertising during recession is higher. Cutting advertising during a recession is more harmful than cutting investment in normal times.

Advice for advertisers and agencies